What did we learn from the Rugby World Cup in retail

In our continual pursuit of POS excellence we went to a few stores across the British Isles to see who was doing what for the Rugby World Cup (RWC). We wanted to see what could we share from the event and most importantly what we could learn, so we looked at the POS we saw from five different angles.

1.Who was the target market?

Men only? Research by Exponential tells us that there is a swell of females who jump on the RWC Band wagon.   It angsts us that they were not targeted more, not least as England’s Women’s Rugby Team claimed RWC victory in 2014. It would have been a fantastic opportunity to leverage this success. 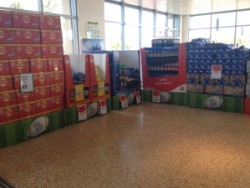 Their research makes some interesting observations around the female fan base and while the comparison to football is not necessarily important in this regard, the points they highlight are interesting when considering where opportunities lie. They tell us:

And this female RWC bandwagon are:

What we say: There is heaps of opportunity to look beyond the stereotypical fan base and capitalise on this wider market. Though we don’t necessarily mean cleaning products as we saw in Morrisons! 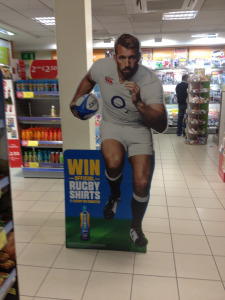 Brands were the main driving force and there were three who stood out as most prominent:

Lucozade Sport did exceptionally well and yet they weren’t officially connected to the tournament. We saw nothing from other sponsors including: Duracell, Toshiba, Cannon, even in Currys/PC World. Retailers themselves (more specifically the grocers) offered less in the way of exceptional POS, their contribution was limited in quantity and creativity and was mainly found in the alcohol aisles.

What we say: Dove Men+Care was one of the few brands in pursuit of World Cup glory outside of snacks and drinks and they stood out because of it. But there are other opportunities, some examples could include: DIY channel, Home Entertainment including gaming and TVs, foods other than alcohol and snacks, rugby players eat porridge! Not to mention the female orientated categories. 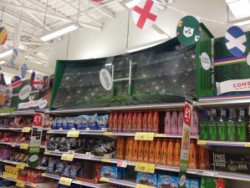 The most unique piece we came across was a large shelf display by Heineken in Tesco, like one of the Coca-Cola dumpbins they incorporated LED lights

The Lucozade Sport dumpbin in N.Ireland had a unique header, we liked this as it added interest and impact without investing in expensive add-ons. Using size and die cut shapes to accentuate this impact worked well.

What we say: We note and like the extra investment in LED lights which goes some way to create visual interest. Measuring the contribution this makes to the bottom line is key to understand for future campaigns

We don’t advocate POS for POS sake, but we do campaign to keep brick and mortar stores exciting and inspirational places to go. We would love to see grocer led POS develop beyond international bunting in alcohol aisles, the normal default for international sports events. We question how motivating these really are from a shopper perspective 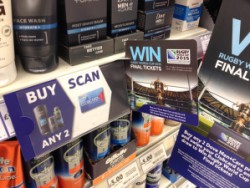 We could write an article on this alone, but we pick out a few summary points.

There is no set rule on what the message hierarchy should be, this depends on who, what, where, when and how. We surmise that Lucozade Sport gave higher prominence to the event than their brand, while Coca-Cola took the opposite approach. Of course there are other elements to consider in this mix, such as price and promotion, to name but two.

The least penetrating and eye catching POS were those with the most text. There were several examples but we share The Dove Men+Care joint promotion with Tesco. This lead from a Clubcard angle, meaning the fabulous prize of the chance to win final tickets was secondary. It was an exciting prize but it wasn’t fully optimised.

What we say: Understanding the motive to purchase should determine the creative route, and will determine eventual success of the instore campaign. From what we see this is not being fully explored.

5.Where to be in store 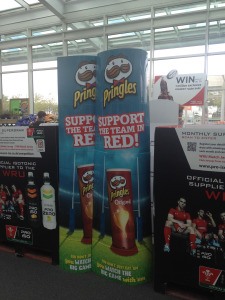 While we saw RWC related activity throughout the stores, it was mainly concentrated at store entrance and in the alcohol aisles, for good and obvious reasons.
Our best example of use of store entrance was the Welsh Asda store visited who had at least three brands here with strong Welsh overtones. Wales is a passionate rugby nation, so it would have been worth considering other touch points around the store yet there were none in the store we visited.

What we say: As brands have tailored their POS by nation, we think grocers could do more of the same. We would consider focussing on what makes each nation unique and proud, perhaps a focus on regional products, services or foods to tap into the national sentiment

POS Insights is driven by increasing POS contribution for brands, retailers and of course shoppers. If you would like further information on what we do please contact us on: hello@posinsights.co.uk